If you find one of our accommodations offered somewhere else for less, then we will match the price. Terms and conditions Read more

Maps: Surroundings
Click on any of the Places for more information 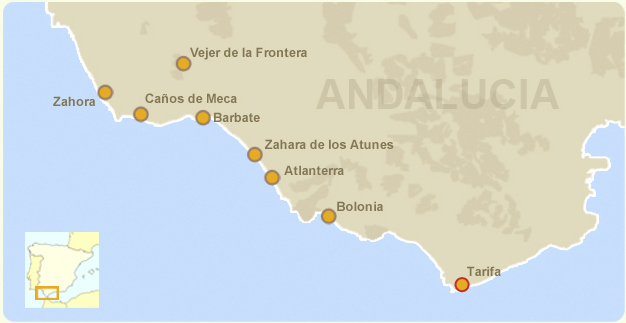 Travel guide with pictures and reviews for Cadiz Spain

Cadiz is the oldest city in Europe and founded by the Phoenicians about 3000 years ago. It later evolved to be one of the most important seaports of the ancient world.

The old town centre is located at the end of a peninsula and is connected to the mainland only by a dam. Left hand of the dam at the entrance to Cadiz you can see large salt marshes being used for salt extraction. Sometimes there are pink flamingos, which feed here of the small fish in salty water.

The city of Cadiz is especially known for her cheerfulness, like the exuberant, colourful carnival processions attracting thousands of visitors from all over Spain every year. But the charm of this city can only be fully understood during a walk through the old centre.

The little balconies of the massive old houses, narrow streets and the many small plazas with orange trees are waiting to be discovered.

Some of the main attractions of Cadiz are the Cathedral, the Torre Tavira and the Plaza de Minas.

The promenade links the city beach directly with the historical center. But despite of a population of 160,000 inhabitants, the beautiful city beach is an oasis of recreation for the young and the old.

Numerous beach bars and restaurants are open along the promenade or directly on the beach.


The Cathedral of Cadiz

In 1722, the architect Vicente Acero put the first stone of this impressive cathedral. It is the last Episcopal Church of its kind in Andalusia.

One of the greatest Spanish musicians, Manuel de Falla, was buried in the crypt of the cathedral.

Within the cathedral you should climb up the stairs of the Torre de Poniente. At a height of 72m you'll enjoy the best panoramic views from the highest point in the city.

Every 30min a guided tour in the languages German, English, Spanish, Italian and French can be joined.

The townhall of Cadiz

The townhall of Cadiz is located on the beautiful Plaza de San Juan de Dios in the old city center. The building was built in two styles:

In 1799 the first part was done by the architect Benjumeda in neo-classic style and the second part was completed in 1861 by García del Álamo in isabelinic style.

The gastronomic landscape of Bolonia can be described as traditional Andalusian and simply delicious. The general rule is to judge the restaurants in Bolonia not by their appearance, but according to the quality of their food - which is absolutely great!

Try the typical Andalusian recipes for fresh local fish like the tuna and sword fish, the unbeatable "Jamon" of the black Andalusian pigs or a filet of the best Spanish beef.

We recommend to join the food with a bottle of Rioja and for dessert a glass of sherry from the nearby vineyards around Jerez de la Frontera.

A large part of the old center of Cadiz is pedestrian zone. Here you will find hundreds of well-stocked shops that meet every requirement.

It is advisable to leave your car in one of the public garages in the center, so that you don't have to walk too far.

The biggest act of celebration in Cadiz is the carnival. The event attracts visitors from all over Spain.

The entire city seems to be on the streets in carnival time. If you don't want to feel like an outsider, we recommend to wear a costume, too.

The so-called Coros (vocal groups) are the main happening of the carnival. They are being pulled on a large cart through the little streets of the old city. Up to 30 singing musicians are placed on such a cart stopping at each cross-road to passionately sing their verses, which are usually politically or socially motivated. The best groups are being awarded by a jury.

During the Easter week, the most important religious event of the year, Cadiz presents itself from its best side.

The so-called Cofrerias (brotherhoods) organize their processions during the Easter week with an enormous effort. It's about carriing various Saints through the streets, followed by an orchestra of musicians and the brotherhood's members.

The procedure follows some strict regulations: the traditional clothing of the musicians and the brothers, as well as the wooden carrier for the Saint are being made by hand with uncountable artificial details.

A "Paso", the spanish word for the procession, takes a full year of preparation and is extremely costly. But it is the highest honor to be part of a brotherhood putting all your passion and also financial engagement into the upcoming Paso.

Cadiz is geografically situated perfectly to reach the best golf courses of the region in a short time.

Besides this one, there are various other golf clubs in the surroundings of Cadiz, which could be combined to a perfect golf vacation in the south of Andalusia.

Thanks to the climate, the golf season never ends in Andalusia and even in January you can play in thin clothing.

Here some more recommendations for golf clubs in Andalusia:


The beaches of Cadiz

The beaches of Cadiz are some of the nicest in Andalusia. The fine white sand will come up to the expectation of any visitor.

We recommend to all sun bathers to use enough sunscreen, because the Andalusian sun can cause a sun burn within a very short time.

Who longs for cooling down in the heat, jumps into the crystal-clear waters of the Atlantic Ocean, which even in summer never exceeds the mark of 20 ° C mark. In winter time the temperature hardly drops below 16 °C.
To water sports enthusiasts we always recommended to wear a wetsuit protecting from cooling out.

The longest beach in Cadiz is extending from La Cortadura to the Torregorda. It is situated on the southern point of town and offers 550.000m² of the finest sand.

"La Cortadura" was awarded with the blue flag, a classification given for great infrastructure and environmental management.

Playa la Victoria extends along the beach promenade to a length of 2,5km. Plenty of great restaurants and bars can be found here, as well as showers and public toilets.

Several beach volley fields are placed on the beach. You can cool down in the 20°C warm water after sweating in the game.

This beach connects with the Playa la Victoria at the upper end of the beach promenade. The beach is only 400m long and mostly visited by the locals.

Surfers should remember this spot as it is one of the best waves in the area.


While temperatures in the summer at the Andalusian coast are comfortably warm, it may be unbearably hot just 20km further in the country. Seville, for example, is used to have above 40°C every summer day while on the coast you only feel 25°C.

In winter time it hardly gets any colder than 16°C, except for the nights which could end up being around 10°C. The temperatures also depend on the wind direction: Levante brings warmer air from the land, Poniente brings cool air form the sea.

The average humidity in summer is around 30%, in the winter it is above 50%.

The probability of rain is very low apart from January til April. Statistically the Costa de la Luz provides more than 300 days of sunshine per year. In fact, rain is always welcome to assure the water supply in summer.